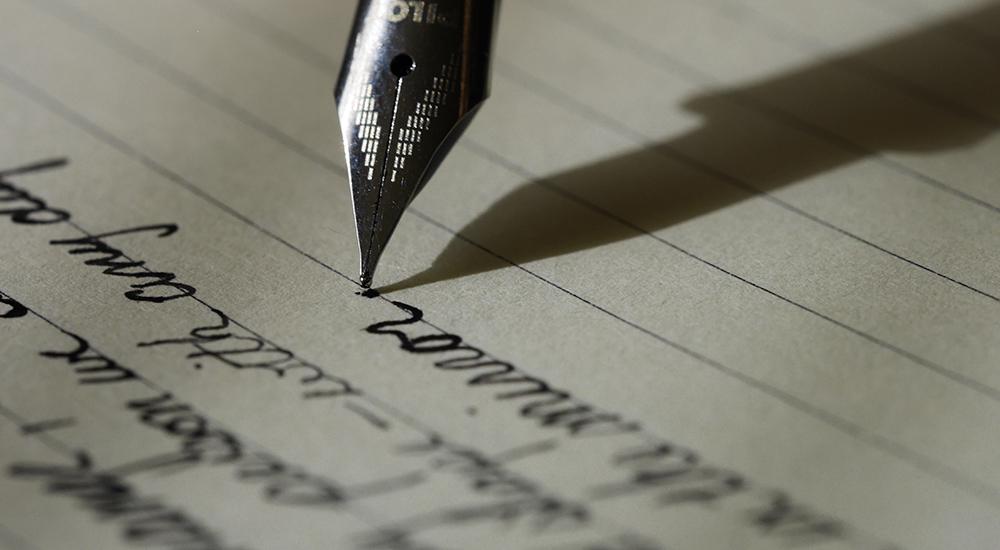 Ever wondered if cursive English is in danger of extinction? Tim Brookes, founder of the Endangered Alphabets Project, shares his thoughts on the debate.

Ever since I started displaying the Endangered Alphabets carvings and speaking about them, nine years ago, the most common question I’ve been asked—in fact, I’m not sure I’ve ever given a talk when this question has not been asked–has been “Is cursive English endangered?”

The fact that this question is asked so invariably, so passionately, and almost always (at my talks, at least) by people over the age of 50, implies that this isn’t just a matter of intellectual curiosity. Wrapped around the question is a tone that implies that something beautiful, important, and highly evolved is at risk—that the shift towards using a keyboard or thumbs and typing out letters as discrete units rather than flowing through whole words is in some sense a step backwards, a step toward brutalization and stultification.

My audiences seem to expect that, as someone who is fascinated by the beauty of writing and whose carving tool seems in itself a cursive device, peeling up little curls of maple or cherry-like tiny wooden watch springs, I’m going to agree with them and bemoan the decline of cursive and the rise of digital writing forms. Also, I’m their peer: I’m 66, and like them, I was taught cursive (that is, the combination of letters and ligatures was drummed into me like multiplication tables) at elementary school.

But in fact I have complex and mixed feelings about cursive.

Historically, there’s nothing fundamental about cursive writing, nothing inevitable. Writing hasn’t always flowed across the page horizontally, as we have been taught it should. It’s a matter of physics. When writing was a high-energy system that required scratching symbols in bone, wood or stone, for example, or stamping them in clay, then a single letter took so much energy it made no sense to add any inessential flourishes or connectors. The act of writing was such hard work it had to recruit gravity and body-weight, by leaning forward, pressing down. No wonder runic letters involved stiff, forceful lines, most of which went down vertically or diagonally.

Cursive only began to make sense when the Chinese invented paper (swiftly followed by brush and ink). This combination entirely changed the physics of writing, which became a low-energy system. Now it actually took more work to lift the brush from the page than to keep writing; ligatures and flourishes required less effort to add rather than more. This is a conjecture, but a reasonable one—and it’s supported by the fact that the paper/brush/ink revolution was swiftly followed by the invention of calligraphy. And when the Arabs captured Chinese papermakers and wrung out of them the closely-guarded secret of pounding wet mulberry bark to make paper, the Arabs, too, began to develop their own form of calligraphy. Writing had become an opportunity for art.

But our teachers’ insistence on teaching cursive actually had more to do with accuracy than beauty. Clerks and mapmakers in 19th-century England, for example, were expected to have copperplate handwriting (almost a contradiction in terms, as copperplate was an imitation of a mechanical engraving process) so that accounts were reliable and ships didn’t run aground. Penmanship, in other words, was fundamentally technical and commercial rather than aesthetic. No wonder that, by the end of the century, typing replaced some of the need for clear, unambiguous lettering. Not sure if folks began to lament the loss of handwriting back then, but I suspect they did.

Moreover, let’s not forget the nun with the ruler on the knuckles. Teaching cursive handwriting had a lot to do with maintaining control and suppressing individuality in children, in whom it was seen as a childish and bad thing. The word “uniform” applies to school clothing and also to the demands of cursive–so much so that different countries had different forms of uniformity, and a French cursive is clearly distinguishable from English or German.

But let’s be clear: I am utterly biased in favor of scripts over typefaces, writing as a human rather than a mechanical act. In fact, I have a theory that handwriting is the most democratic art. Letters are different from mathematical symbols and musical notes in that, when we’re writing them in the original way, by hand, they are modified by the act of using them. We don’t shape percentage-signs or quarter-notes in anything like the range of ways we shape letters. Letters are a very special, possibly unique kind of symbol. We have an entire branch of art based on the way we write them: calligraphy. We have scientific handwriting experts assisting the police by reading handwriting to try to understand the writer’s character. Handwriting, unlike printing or shorthand or math or music, is both a set of symbols with meaning and an opportunity for self-expression. Le style, or perhaps le stylo, c’est l’homme meme. In this sense, writing is the most democratic art.

Cursive writing (and other forms of non-cursive script) appeal to us, I think, because they display writing as a human act, rather than a mechanical one: we can see the dynamic movement of the pen across the page, we can unconsciously put ourselves in the writer’s place–and as such we can also see and appreciate the effort involved at making the writing clear, regular, legible–and the attention given to the flourishes.

As such, I’m sad about the simplification of scripts into more mechanical or geometrical forms. Chinese and Arabic are remarkable in that they are true scripts—that is, you can see the movement of the hand, the point where the pen or brush hits or leaves the page. They make us feel writing as a human act. But both have now been reconceived in simplified forms, more geometrical and mechanical, easier to learn and execute, perhaps, but colder and more artificial. No opportunity for engagement, elaboration, imagination, pride, and care in one’s work.

So what’s my answer to the question about cursive? When people, usually people over 50, bemoan the fading of the cursive tradition, I sense what they’re unhappy about is yet another way in which the younger generations are changing things so their elders will feel obsolete rather than respected. Almost nobody in that elder population observes that everyone under 25 writes way, way more than people did before the advent of affordable computers, that writing has in fact become not only more widespread but actually instinctive. More people write more of the time now than at any time in human history. Those in my generation somehow don’t see that; they’re much more likely to criticize the use of text-abbreviations, the rise of the emoji.

Want to learn more about the world’s endangered alphabets?